I guess her banged-up wooden work table from the kitchen doubled as dining area.  She laid out chipped enamel bowls with a metallic clank and I pried my spoon out of a deep gash in the table top.  Had she used an ax on something or what?

She ladled squirrel stew into my bowl and I was on the fast track to emergency vegetarianism.  Oh, I’m so sorry, but I don’t eat meat—just say it, SAY IT!  It’s not like I’d never lied before; to tell the truth, I did it most everyday on the job.  Lies went over so much smoother than truth.  But I couldn’t bring myself to lie, not at her table.  This irked me.

She drew up a chair for herself, looked across the steam from our bowls, locked eyes with me and just started a-prayin’.  I kid you not.  There was no folding of hands or reverent bowed head.  It was flat-out God-talkin’ if ever there was.  When did I start dropping my g’s?  I need to go home.  Now.

“Oh my Father, You’re here and I wish I could ladle you some soup and look in Your eyes just as I do for the dear one You’ve led to my home.  Thank You for the squirrels, nourish us we pray with Your provision this day and always.  In Jesus’s Holy and Most Blessed and Wonderful Name, AMEN!”

I had dropped my eyes at the “Oh my Father”, because who can lock gazes with a mad woman and not feel the tug of insanity yourself?  I consider most religious people slightly (if not completely) unhinged.  Further evidence, I’d say.  And now there was the matter of the stew.

She happily dug into it, unconcerned about my own hesitation.  I swirled my spoon through the greasy broth and I felt small.  I felt small because I was somehow being defeated by a measly bowl of soup. My stomach was making known it’s needs in cavernous yawning sounds and I needed food, even this food.  I lifted my spoon up, the murky liquid swirling, loathsome squirrel meat floating atop.

It was then that the lady (I still hadn’t asked her name.  For shame, I know.), stood up suddenly from the table, rocking her stool back and nearly tipping it over.  She strained to hear something.  All I heard was the creek, my belly’s moans, and the birds.  She smiled.

She strode without a word over to the coffee table and snatched up her rifle and padded softly to the open door of the cabin.  Then out she leapt and I didn’t hear her land.  Who goes bouncing out of her house mid-meal with a gun without a word?

I took advantage of her absence, pinched my nose shut and dared a spoonful.  It was….good, actually.  I let go of my nose and tried it full hog.  My two days-empty belly huzzah-ed.  Protein, it said, gimme gimme!  I quickly finished my bowl and I have no excuse nor words for what I did next; I finished hers too.

Gunshots startled me mid-bowl licking and the bowl flew up and out of my hands.  I think I screamed.  I did manage by some magic ninja move to keep the bowl from hitting the table.  What had she hunted this time?  I could hear her singing out there.  I hoped she’d stay out there for a while.

It was an hour later that she strode happily into the cabin, beaming a wide smile and splattered all over with blood.  No one would believe the stories I’d tell of these days.  No one.

“A beautiful buck.  Just beautiful.  He’s strung up now and bleeding out.  We’ll need to lug him into the root cellar overnight though, on account of the bears.”

Ever had the feeling that you’ve understood all the words in a sentence and yet as a whole assembled they have no meaning for you?  Yeah, me too.  I should mention that meanwhile I was guiltily finishing up the stew in the pot.  I ate all the stew, Lord help me, yes.  Did I just involuntarily pray?

She looked at the empty pot.  She looked at the licked-clean bowls.  She looked at my stew-smeared gluttonous face.  Her eyes crinkled at the corners and she smiled.  I was so filled with shame at my selfishness, after all her hospitality I go and mow down the whole supper.  I hung my head, feeling like the kid who got caught passing notes in class, and started to apologize, but realized, via the silence, that she had already gone back outside.

Her gun lay in the sun on a weathered old picnic table, and I was surprised by the beautiful carving on the…uh….the wood part. 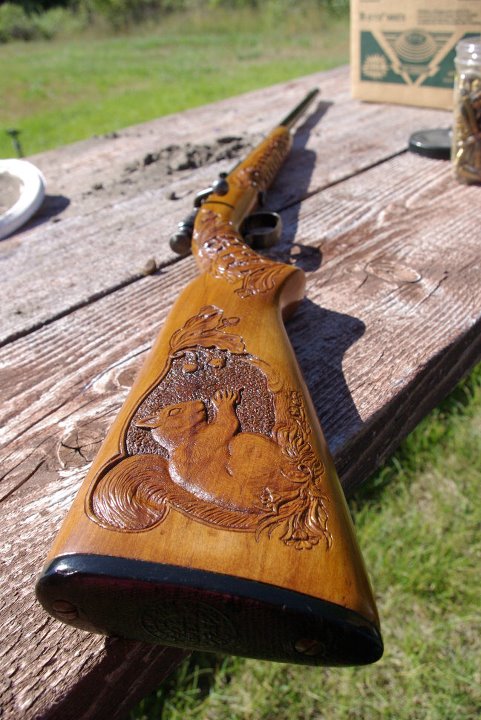 I guess I’m a bit of an art snob.  I can make derisive snarky elitist comments with the best of them (worst of them?).  I’ve torn down an artist’s work within their hearing.  I don’t know why, or maybe I do.  I felt above them then, above these beatnik/hipster/tortured souls who live on Ramen noodles in filthy flats and can produce more beauty in one brush stroke than I could with a hundred tries on a hundred canvases.  I hate feeling little, so if someone is bigger in some way that I can’t be, I tend to saw them off at the knees.  I’m kind of a jerk.  I never thought about though, until now.

I found myself appreciating this gun.  This was new for me.  The fashionable consensus among people of my sphere is to abhor guns and to see them as one more useless thing in the hands of rednecks; that and a ballot.  Why am I such a black heart?  How could I think such things and benignly laugh when others do?  Oh, who cares.

I traced the squirrel carved into the wood with my scraped-up finger.  I could appreciate this one gun, I guess.  It did land us supper, right?  The lady called me over to the eviscerated deer hanging from a rope-pulley-thingamajig.

“I need your help to get him into the root cellar, the breeze is blowing his scent to every hungry bear within 50 miles and it’ll be dark enough soon that they’ll dare to steal him.”

“Do you want the pokey side or the poo side?”

“Come grab the butt while I lower him”.

Yeah, sure.   I can add “cupped a buck’s butt in my bare hands” to my lifetime achievements list, right next to “Paid cash for a brand new Porsche”, just for irony’s sake.

I guess the rope slipped; I’ll give the lady the benefit of the doubt that she wasn’t trying to make Mr. Hairy Hiney fall on top of me, unfortunately, “jelly”-side down.  I screamed my head off.  Inside the buck, his warm ribs giving me the worst hug of my life.  The lady was laughing and apologizing, but mostly laughing.  She peeled him off of me with a great heave and I shot all sorts of fiery darts at her with my crazed eyes.