Olive wood is attractive….I wouldn’t want stainless steel; it’s too cold and sterile.  Is a ceramic grinder important?  Would it last longer than these plastic ones?  Warmth….copper?  Olive wood.  Definitely those ones, but I like the copper and glass pair with the mill at the top to avoid crumbing up the table and counter.  Plus you can see that you need to refill.  Wait….$170?!?!?  No.

I looked up from my laptop.  What sort of consumeristic wormhole had I fallen into?  I closed the computer and laid it aside.  It was revelatory; how easy and simple it is to create necessities out of luxuries; to talks oneself into the pepper mill that defines you.

I am perfectly capable of grinding pepper in the mortar and pestle in my kitchen.  I have a pepper mill, though it works quite poorly.  What led to this silly journey through page after page of perfect pepper mills?  Shopping.

I make nearly all of the gifts for my loved ones, but there are always some things that lay outside of my expertise, but would be just the thing for particular people, obliging me to brave the wild frontier of retail shoppes.  My daughter was thrilled to go along with me; she has no hangups whatsoever about buying new things, and she fairly pranced along the aisles heaped with goods.

Maybe it’s the lighting that gives me headaches, or the crowds, or the ecological impact of so much packaging waste and overproduction of silly junk.  On my way to purchase the gift of two stainless steel travel mugs I passed by a table laden with gleaming, tasteful kitchen goods.  Ah, salt and pepper mill sets.

I remembered my sluggish and slow pepper mill, how its plastic grinder parts were wearing down and grinding unevenly, and how it made me feel less like a chef and more like a pepper wrangler.  I picked up the sets and examined them, the rectangular florescent lights above me making constellations across their smooth, shiny curves.  I put them down, and I bought what I had come for; gifts for others.

But didn’t it just nag at me then?  The idea of it?  Useful, beautiful, long-lasting, artisan crafted salt and pepper mills?  They’d be on our table for the rest of our lives, a continuing testament to our good taste in quality craftsmanship.  Through all the seasons they would season!  I basically need them!

Except that I don’t, but I thought to check online…maybe there’d be a suitable set for around twenty dollars and I could save for it, and and and…

I don’t want to be defined by my pepper mill.  I want to be Christ’s simple child, learning His love, seeing His way, and orienting my life around dwelling in His Presence, and bringing His warmth and joy to others who need “a timely word, seasoned with salt”. 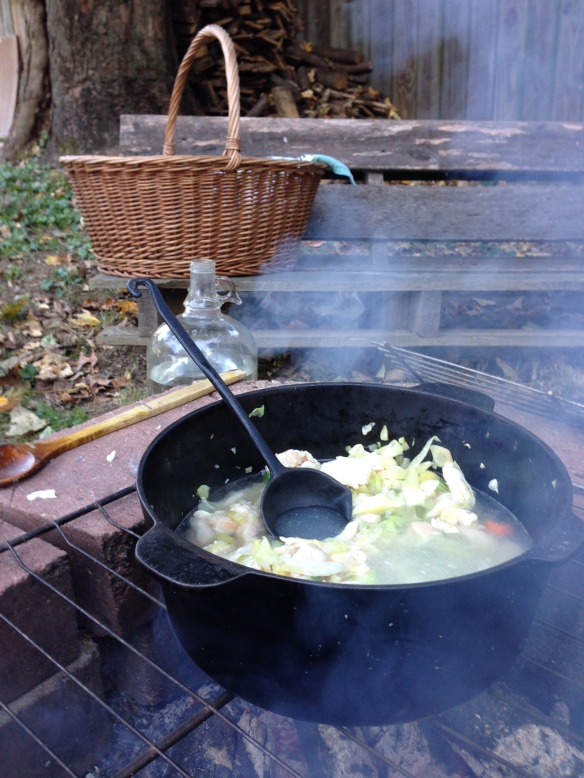 It isn’t just the crowds and the fluorescent lighting and the endless racks and piles of goods.  It’s the loudness of breathless materialism writ in bits:  Buy One Get One 40% off!  Stocking Stuffers!  Buy More, Save More!  Gifts Worth Giving!

Everywhere you look the signs scream, plead, and croon about how parting with your cash for this or that will MAKE your Christmas, just absolutely.  The stores are practically doing you a favor!  Huzzah!  Jump on the buying train with your shiny shopping bags bumping heavily in your hands; let’s ride to Christmas-topia!

Let me just let that train go past.  Okay.  I am not anti-presents; I love them, giving and receiving.  But, folks, the way we consume our planet’s resources is out of control.  I’m not saying there isn’t a time to buy something new; underwear for instance is usually wise to purchase new (although just today I bought 10 pairs of boxers for my sons at the thrift store as they were quite immaculate).  But to believe without qualification that the only decent thing to gift is a new product says a lot about our susceptibility to the Christmas-topia train’s siren call.  A price tag does not a good present make.  Given that, there are some good ways to buy new things; things that will last, things that support our local economy!  Okay, looking both ways before crossing the tracks, here’s my ideas for great, responsible, wonderful gift-giving this year!

Beyond these ideas, make a habit of “preventative shopping”.  I learned this idea from the blog Miser Mom.  The concept is to go garage sale and thrift store shopping throughout the year, picking up items that will be useful later (shoes and clothes in the next size up for your kids) and gifts for others.  I have put this into practice and am no longer assaulted by the crisis of snow boot and pants and whatnot shortages quite as often.  I also have a “gift box” of sorts of lovely items of good quality for birthdays and holidays.  Spend a wee bit now to avoid spending a whole lot later.  It works.

This is by no means an exhaustive list, so feel free to add to it in the comments section.  Happy gifting!

“The fact that you possess a surplus of things that you can’t bring yourself to discard doesn’t mean you are taking good care of them.  In fact, it is quite the opposite.”

I handed the trash bags of clothes over to the donation worker, a mild buzz of panic in the back of my mind.  They were perfectly good, most still fit me, how could I give them away?  Never mind that I always chose among a handful of other garments, leaving these ones to stagnate in the back of the drawer, or clinging to their hangers dejectedly in the closet.

As a frugal person, I thought it my responsibility to wear any usable garment until it was threadbare (even, I suppose, if it was so rarely worn that it would not visibly deteriorate for decades).  But the reality is, I just don’t wear clothes that fit too tight or too baggy, or always needed to be paired with another layer for modesty’s sake, or in any way throw up all sorts of “ugh, that thing” when I see them.  The truly responsible course is to make the garments available to someone who does need them, while they are in reasonably good shape and not years out of style.

So I ruthlessly went through my clothing, inspired by Marie Kondo’s book The Life-Changing Magic of Tidying Up.  I was grateful for her insight into why we keep what we keep:

“But when we really delve into the reasons for why we can’t let something go, there are only two:  an attachment to the past or a fear for the future.”

I am nostalgic by nature, and for some reason, having the moth-eaten sixteen year-old wool sweater that Dustin bought me our first year of marriage, was my tangible link to the memory; it was almost my “hold” on that time, my anchor to the past.  Though it was too ratty to wear anywhere, I held on.  But did I, when seeing it huddled on the shelf in my closet think “Ah, the sweetness of our newly married life!” or did I feel rather a mixture of annoyance that I hadn’t gotten rid of the very tattered sweater yet and guilt that I should even think of doing so?  The latter, I’m afraid.

Fears for the future played their part as well…”But what if I need this?”.  This area was a lot easier to work with.  A simple “God provides” preached to my own heart put the fear in its place.  Besides, if I don’t want to wear it now, why would I want to wear it later on?

Probably the goofiest, and yet incredibly effective, advice she gives is to thank your possessions before you dispose of them.  That dances a bit too close to animism for my taste, but I did thank God for the items and for taking such good care of me.  I handled His gifts with respect and gratitude, preparing them to bless another’s life.  It was no longer a guilt-ridden process, but a joyful one; releasing gifts that had served me well to go on and serve another, rather than storing and neglecting them.

She recommends doing the whole process very quickly, but with my children to care for I am doing them at a pace that enables me to look after my family and not make everyone crazy.  So far I’ve worked my way through most of my family’s clothing, and half of the kitchen.  The area I am most dreading is the books!  I love my books of all kinds, and I do not anticipate this being a pleasant task, but I could be surprised.  Marie’s encouragements come to mind:

“I had been so focused on what to discard, on attacking the unwanted obstacles around me, that I had forgotten to cherish the things that I loved, the things I wanted to keep.”

I have already been rewarded by my modest progress.  There is deep satisfaction to pulling open my shirt drawer and seeing every one of them at a glance, folded neatly and almost filed in their vertical shapes.  I know what I have, where it is, and what I need more of.  For example, in my sorting I discovered that I only own five short-sleeved t-shirts.  Come summertime this will not be enough, so when I find a good price on them I know just what to buy, and what I do not need as well. 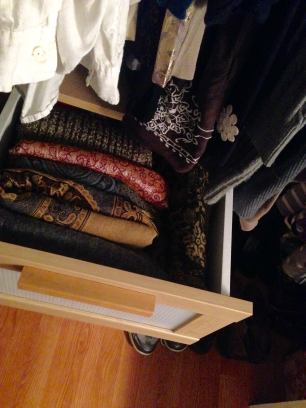 As a mother of five, who is always dealing with disorder, strewn toys, and messes, it gives me a thrill of joy and a lot of peace when I come into my room at day’s end and find it less like a storage room and more like a sanctuary.  My eyes can rest contentedly and not be agitated by visual reminders of work-needing-done.

I highly recommend the book, though for Christians, wade past the goofiness in order to reach the good stuff.  You’ll be glad you made the effort!